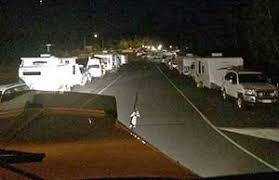 Truck drivers are required by law to take breaks from driving. How can they take those breaks when travellers are constantly using the truck bays for their own overnight stop.
Consider the truck driver.

All too often we see caravan or motorhomes using truck parking bays.  This is not a good promotion for “Sharing the road”.  Not only can this action have a detrimental effect on relations between recreational road users such as ourselves and the professional heavy vehicle drivers out there – inconsiderate use is selfish and dangerous.  For the truck driver, it could also mean fines costing thousands of dollars, or a worse nightmare in the event of an crash.

There have been numerous social media campaigns on this subject but the message seems only to be getting though to some.  Unfortunately, those that need the education are the ones who choose to remain ignorant or somehow believe they are entitled because they have a large rig.  There are too many scenarios to cover but it all boils down to a few factors.

Before we get into the safety factors, lets briefly touch on the term “free camping”.  Free camping is not necessarily “no cost camping”.  Free camping is short for “Freedom camping – freedom of choice”.  Over the years as more people take on the concept, the term has been bastardised by some to literally mean no cost.  Something that caravan park operators have seized upon in their campaign to have free camping banned.  Free camping is also known as bush camping, freedom camping and independent camping.  Basically any form of budget camping that is independent of a structured caravan park.  Just be aware of this when you plan your trip and breaks.  Rest areas are not ‘free camps’. 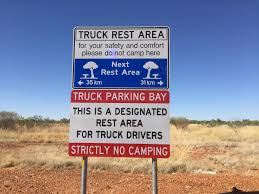 You are not driving a truck. Move onto a regular rest stop. Plan your travels to include breaks but plan them to allow others to take their breaks too.

Rest areas are something else.  They’re precisely as described – a place to stop and rest.  That could mean a time limited parking spot usually defined by signage stating a time limit.  We’ve seen local council signage with rest area time limits ranging from 8 hours to 24 hours. State government Main Road authorities have regulations that also stipulate time limits which usually range from 8 to 20 hours on unsigned state controlled rest areas.  Some have separate designated sections for trucks and other vehicles.  Becoming more common in some states are dedicated truck only rest areas with a smaller vehicle and caravan rest area further up the road.  Signage indicating this fact at the truck rest area – but still, there have been caravans and motorhome, even tents set up in the truck bay!

Plan your trip well in advance.  Don’t try to finish work and set off the same afternoon thinking you can do another 6 hours drive to get to your camp spot before midnight.  The safer option is to leave early in the morning after a good sleep, rested and better prepared for a road trip.  Arriving late at night is something that will strain relations between you and other campers as you disturb the peace while you set up camp.

If you must depart after work, get a jump start by driving just a couple of hours, get to a rest area that can accommodate you, or go into a caravan park for the night – remembering to book ahead so the park operator is ready for your late arrival.

Young family travellers especially have much at stake.  Often with a shorter time span for their get-away, having to deal with peak time traffic, kid stops and a myriad of other unforeseen events that the travel gods don’t let you in on until they creep up on you.  A two hour trip, along with tempers can double in no time!   Take a close look at the trip you’re planning and keep time factors high on the agenda.  If you are planning a long trip, consider an extra day off rather than compromise on sensible and appropriate travel and rest times and places.  Tragedy and deaths happen in seconds, and there is no going back!

Lack of understanding and education is more easily changed than attitude.  For some, it is a matter of  “I’m a road user, I’m entitled to park where I like”, or “One car or rig is not going to make a difference”, but that’s just it, it just could.  We are all entitled to stop and rest up but there are adequate appropriate places that won’t interfere with a truckies’  livelihood or well-being.   You wouldn’t like it if a semi trailer pulled up in your driveway to spend the night.  Don’t let  any self-righteous and selfish attitude reflect on us recreational travellers as a whole.

Overtaking is something that drivers take for granted.  It happens every day, sometimes without much thought, we do it almost mindlessly.  When you have a caravan in tow or a larger motorhome, the dynamics of overtaking change drastically.  The air pressure around the vehicles interact, and can be fatal for the unwary.  As the truck moves forward, the air pressure ahead increases creating a ‘bow wave’ effect.  Just like you see as large ships plough through the water.  But behind the ‘bow wave’, the air pressure changes and becomes a ‘low pressure’ area, or near vacuum.  This creates a pattern along the truck of ‘highs and lows’ and that’s where some travellers are caught out.  It’s these highs and lows than can contribute to instability of your caravan causing the ‘wobbles’ followed by fishtailing, which can result in total loss of control, which leads too……………. 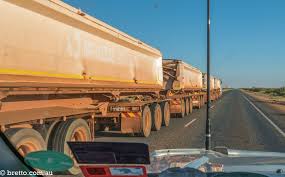 Sometimes it might be best to take a bit of a break to let trucks get ahead of you. Monsters like this are common in mining areas.
Roadtrains can measure greater than 50 mtrs.

Speed is a critical factor here.  Most experienced travellers with do around 90kph for a number of reasons – fuel saving and safety being the most commonly answered.  Many truck drivers are aware of this and are reasonably happy with us at this speed.  They can adjust their speed without too much detriment and overtake safely.  Being the overtaken vehicle, you can be of more help if you maintain you road position and speed.  You can back off a tad once the truck is beside you.  Backing off at the right time can reduce the distance the truck must travel before re-entering the lane ahead of you.  No sudden braking, just ease off on the right foot a bit.  Let the driver know when it is safe to pull back into the lane.

DO NOT OVERTAKE signage rules

We’ve all seen these signs on trucks and other large vehicles.  You may have seen the signage on caravans and motorhomes too.

Did you know that if your motorhome or tow vehicle and caravan / campertrailer is 7.5metres or longer and you have a “DO NOT OVERTAKE TURNING VEHICLE” sign on the back, you are allowed to turn left from (or partially from) the lane on the right of the far left lane.

What if your set up is less than 7.5 metres?  You can not legally display the “DO NOT OVERTAKE TURNING VEHICLE” signage, and nor are you legal to use more than one lane to make a turn.

Intersection markings are usually too tight for large vehicles to turn using a single lane so you will need to swing wide to make a left turn. Try to position your rig so that vehicles behind you cannot pass on your left and make sure you have the best view possible of the road you are turning into. 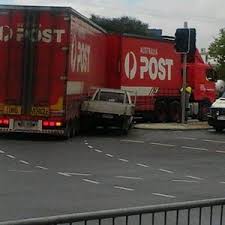 Someone not understanding the concept of large vehicle turning needs.

If you are turning right, your motorhome or tow vehicle and caravan / campertrailer is 7.5 metres or longer, and you have a “DO NOT OVERTAKE TURNING VEHICLE” sign displayed on the back of your rig, you can turn right from the lane on the immediate left of the far right lane.

When making a right turn, make sure you have entered far enough into the intersection before commencing the turn right into the street. Commencing the turn too early, the side of your rig may hit vehicles on your right as the back of your vehicle cuts-in to the turn.

‘Rear marking plates may also be fitted to light vehicles. However, in certain jurisdictions if the vehicle is less than 7.5 metres long, the plates must not have the words “DO NOT OVERTAKE TURNING VEHICLE’.

‘Class 1 retro-reflective material is more durable and because of its improved retro-reflective performance, when compared to the older Class 2 plates, the plates can be smaller and yet reflect more light. Class 1A pressure sensitive plates have been developed so that these plates can be affixed directly to the vehicle without a metal backing plate. You may use either style provided that both plates on any one vehicle are of the same size and material. Plates complying with AS 4001 are available in either rectangular or strip configuration as illustrated in the Figures 1 and 2 respectively.

Class 1 plates are preferred because they outperform and outlast Class 2 plates.’

As requirements may vary from state or territory please check with your Road Transport Authority or Department of Transport for further details.

Rigs you can expect to see

There are many different combinations of trucks you may encounter on your travels.  The usual trucks you would normally see are semi-trailers through to the largest Road trains.

Road trains can be just two or three trailers long or, as you will see in the image below, anything up to around 53 metres long.

Now imagine you want to overtake one of these monsters.  How much time would it take to get past one?  How much road distance would it take if the truck was traveling at 90ks, and you towing at 100k?

The time – about 82 seconds.  The distance you would have travelled to get past is about 2254 metres.  That’s over 2 kilometres!  Here is a link to a calculator that you can check your own vehicle length and speeds.   Overtaking speed and distance calculator 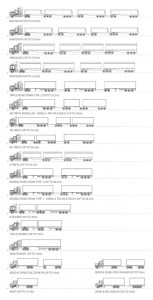 Different truck combinations you may encounter 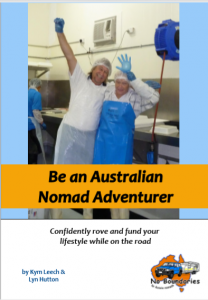 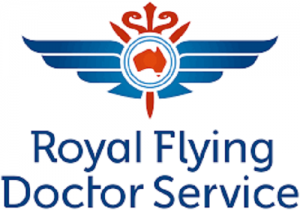 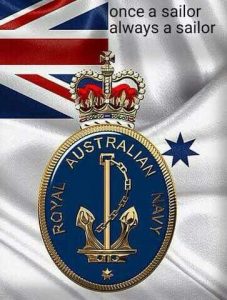 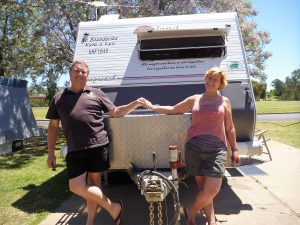